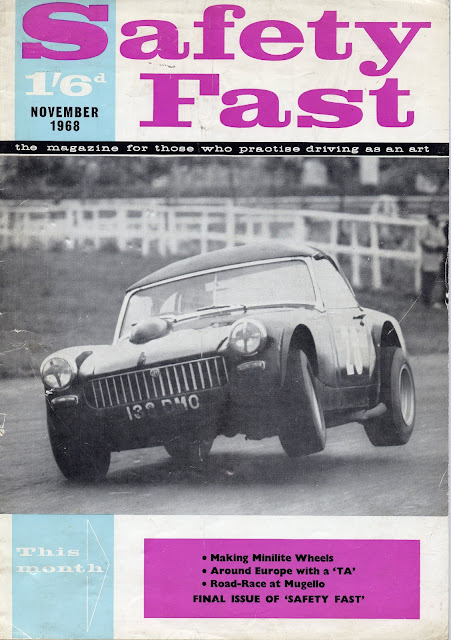 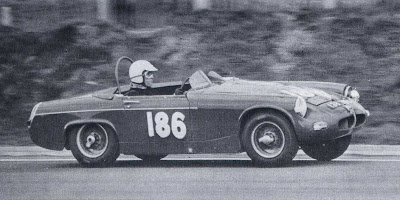 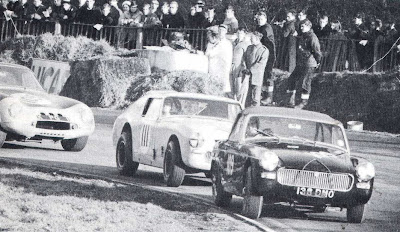 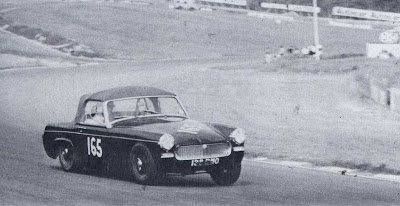 ‘138 DMO’  (Chassis No: GAN3/23948) was the factory prototype wind-up window car (then registered as ‘MG 1’) that was subsequently allocated to the MG Development and Experimental Department for preparation as a factory race car and re-registered as ‘138 DMO’.
It was the first MG Midget to use the Cooper ‘S’ derived 1275cc A-Series engine. In the ensuing years, Roger Enever - the son of MG Works Competition Department Manager - Syd Enever - drove this car in its many guises with great success. From thereon it had a checkered history, mainly in Modsports, surviving many accidents - but only just. In 1983 it became part of a deal to buy a race prepared MGCGT (subsequently known as the 'Grey Whale') and that's where its present owner - Julius Thurgood - first came across it in a lock-up garage near Crystal Palace. On the 1st February 1983 Julius sold his MGCGT race car 'UYD 96G' to Ian Parkinson, a young would-be racer who had bought the rather worse for wear '138 DMO' Modspors racer with good intentions to race it. However, the project was a step too far and he went for an easier option - namely buying Julius' race-ready MGCGT and divested himself of all the extra work to get on track by part-exchanging his downtrodden racer in the deal. 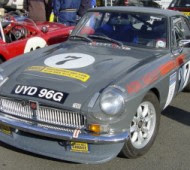 Julius, accompanied by MG racer and marque specialist, Rae Davis,  trailered the forlorn MG Midget racer back to Rae's Moto-Build premises in Hounslow to assess just how much of a problem that Julius had let himself in for! The car was a mess of tank tape, broken fibreglass and poorly fitted parts. But Rae coaxed the engine into life and that, at least, meant that the car might again have a future as a racer. But little was done in the ensuing weeks until Rae realised that his new MG Metro racer was not going to be ready for the forthcoming MG support race at the inaugural Thundersports Meeting at Brands Hatch, which was scheduled to be held on 30th May 1983. Rae Davis was never one to miss an opportunity. He needed a car - and a sponsor for the race - and he had a ready-made pairing of the hitherto defunct '138 DMO' racer and its new owner - Julius Thurgood! A quick call to Julius was all that was needed to seal the deal. That was the easy bit - but getting the car ready to race was quite another story. In its now radical Modsports guise, '138 DMO' didn't comply with the current MGOC race regulations. For a start, the engine sat too far back in the chassis and the little car's massive slick-shod wheels and wide wheel arches were far too wide to comply with the Club's championship regulations. Moving the engine back into its original position was easy - as was removing the giant wheel arch extensions, which were frenetically dispatched by Rae with judicious use of a nearby club hammer. The one-piece front end of the car fell off unaided and was replaced by a standard-width, shiny new one-piece fibreglass front end, finished in brilliant white gel-coat. A universal "one size fits all" wheel arch extension kit finished the rough edges off around the butchered rear wheel arches to some semblance of professional presentation. However, the motley selection of banded-rim steel race wheels, sourced from Rae's vast stock of second-hand race parts, were definitely items of secondary quality - as were the 20-year old 'Torino' treaded tyres that came with them. Time was running out and Rae and Julius were now working solo on the night shift to get the car ready. Detail finish went by the wayside as the race day fast closed in. The car was now running and more or less in one piece but it looked like a patchwork quilt. The interior of the car was still in its original black but the car had been oversprayed in tartan red many years before. Now it had a white front and sported bare aluminium rear wheel arches. Rae decided to give the car "a quick tosh over". All went reasonably well until he realised that he had not quite enough red paint to cover the whole car. Julius then suggested that they mask off a central white 'stripe' on the new bonnet and carry it over the back of the car. "It had better be a bloody great wide one!" quipped Rae, looking at his near empty tin of red cellulose. So that's how '138 DMO' gained its new livery - not quite by design - more by necessity! 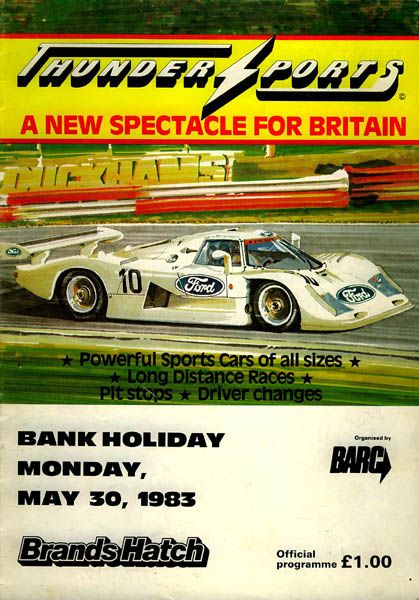 So the Moto-Build racing team and '138 DMO' arrived at Brands Hatch for the first Thundersports meeting. Rae drove the racer down on the Moto-Build truck and Julius warily motored down to the circuit in his daily driver - a 1955 Ford Ranch Wagon (fitted with rare Thunderbird engine option - but very short of brakes!). So far - so good, but whether the 'Old Nail' racer would get through scrutineering was the first of many challenges facing the team that day. There was a great deal of muttering and negotiation in the Scrutineering Bay at Brands Hatch that morning. Extraneous holes in the bulkhead were hastily sealed, the fire extinguisher was swapped for another from another competitor's car and the harness fixings were reinforced. Finally, after much cajoling, it passed. That in itself was a victory! 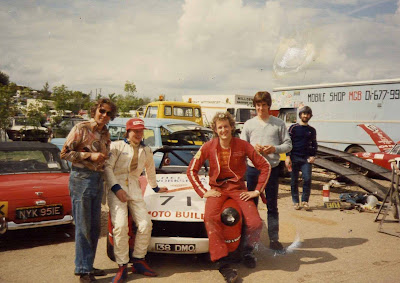 The qualification to the MGOC support race was to be yet another test of ingenuity for the ever enterprising Moto-Build race team. Having never raced the car before, Rae's game plan was to "go like hell - and see if it breaks!" - it did just that. Charging over the kerbs into Paddock Bend, Rae swung the old racer sideways as neither the brakes or the ancient rubber were up to anything like retardation. The kerb hopping was too much for the tired suspension and the car bottomed out, catching the oil filter and distributing the contents of the sump down Paddock Bend faster than Rae's usual late Saturday night after-hours ejection from his local Pub. By the time Rae had realised that something was not quite right with the engine - the bearings had evaporated in a cloud of blue smoke. The engine was shot and so was the any chance of making the race. Well not so. Julius got the team together and coaxed them into removing the sump and at least seeing just what the damage was. From memory this was a Sunday and the little motor factors that plied it's trade at the rear entrance of Brands Hatch had already closed shop so the slim chance of buying a new bearing set was history. But in those day almost everybody smoked and cigarette packets back then all contained a silver paper lining. Tramp-like, Julius scurried around the race paddock, collecting discarded cigarette packets until he had enough silver foil to pack a full crankshaft set of bearings. Moto-Build's engine builder - 'Sexy Dennis' - was entrusted to piece together the scalded bearing caps, pack them with the silver foil and clamp them back on the scarred crankshaft. Liberal splashes of neat STP oil additive soothed the blued crankshaft journals before the bastardised 'bearings' were reunited with the connecting rods. Time was running out and tolerances were sheer guestimates as the engine was hastily reassembled. The engine was fired up just as the call for the assembly to the race was announced over the Tannoy. Was there any oil pressure? To all the team's surprise there was (partly due to the fact that the sump was filled with neat STP!). What came next has passed into the annuals of MG racing history - read for yourself in the following Autosport race report: 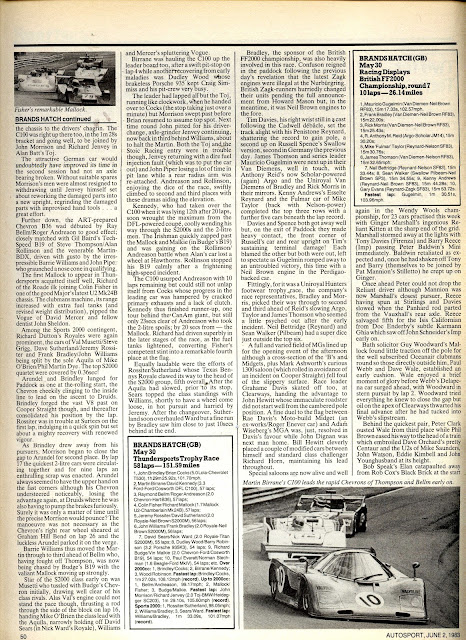 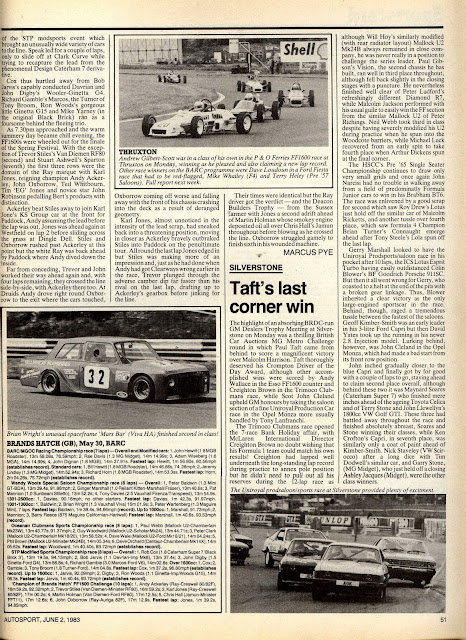 Rae Davis simply rose to the occasion - he flung the ex-Work racer '138 DMO' around the Brands Hatch GP circuit as though it had just come out fresh from Syd Enever's Competition Department - not the oil drum dustbins of Brands Hatch's paddock! Lap after lap he gave little heed to the death rattles of the engine or the screams of misery from the tortured scrap tyres with the cracked side walls. By the time the chequered flag fell, his opposition was well and truly mentally defeated by the audacious driving talent and racecraft of Davis - how on earth did he hold it all together? Well, anyone who has witnessed Rae slaying big-engine Jaguars at the Goodwood Revival meeting in his diminutive Austin A35 will tell you that someone broke the mould after Rae was born - he is truly unique! A delightful one-off! 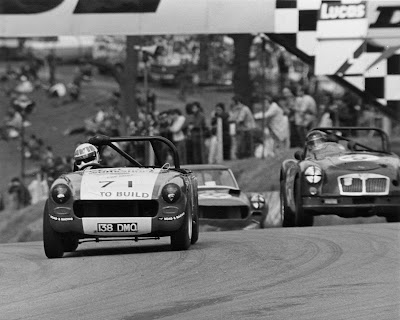 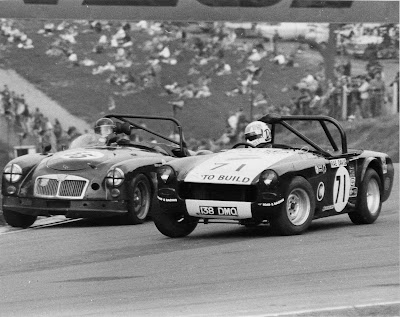 Note to Editors:
Re-united into present ownership in 1997, ‘138 DMO’ is currently being prepared for historic events - this historic car is now owned by Julius Thurgood.